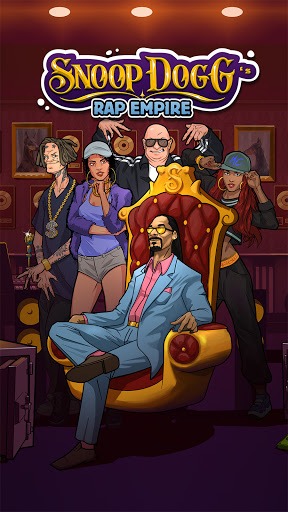 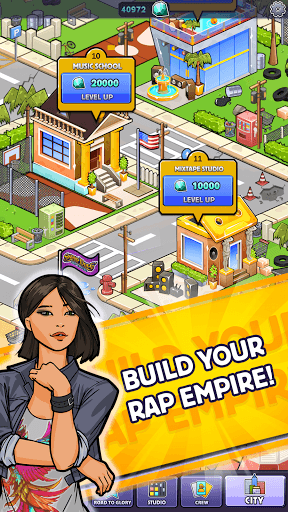 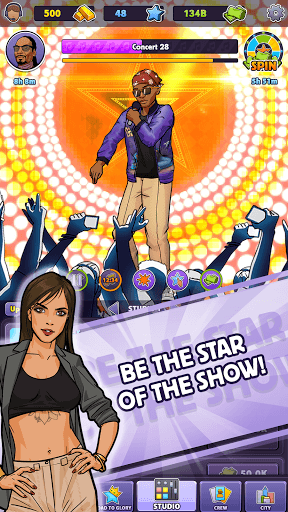 Are you ready to become a rap legend? Start your rap career and make a name for yourself in the rap game in this idle tapper game with the help of the legendary Snoop Dogg. Fo' shizzle.

Tap to play the hottest new mobile game of 2020 and download today!

Start as a down-on-your-luck rapper, slinging mixtapes on Venice Beach and finding nothing but rejection. You know your tracks are fire and you just need to make your big break. You’re close to giving up, but everything changes when Snoop Dogg stumbles on one of your CDs and gives you a call. He likes what he hears and he’s going to turn you into the next rap legend!

Here's how you make it to the top with the help of Snoop Dogg:

TAP TO LAY DOWN TRACKS AND MIX BEATS
Music makes the money. Go to work in the studio by tapping to put together new albums and keep the cash flowing in.

UPGRADE AND UNLOCK YOUR STUDIOS
Upgrade your studios with new and better instruments to speed up song creation time and earn cash faster. Unlock brand new flashy studios in the hottest parts of town to expand your operation.

BUILD A TEAM OF MANAGERS WITH UNIQUE ABILITIES
You can’t make it alone in the rap game. Build a team of talent around you by unlocking and assigning managers, each with their own unique backstories and set of skills that’ll help you make it to the top.

WORK WITH SNOOP TO ADVANCE THE STORY
Snoop’s got your back, and he’s gonna make sure you hit it big. Complete concerts and tasks from Snoop to advance the story, as you work your way up in the game.

SIGN WITH NEW LABELS AND RAKE IN THE CASH
When the time is right, sign with a new label to prestige and earn huge rewards to massively boost your song speed and income. There’s always more money to be made.

INVEST IN REAL ESTATE AND REAP THE REWARDS
Move beyond the rap game and sink your earnings into real estate for big persistent bonuses. You’re not trying to just get rich, you’re going to be wealthy.

HUGE UPDATES ON THE HORIZON

This is just the beginning. Keep an eye out for these big updates in the near future that’ll take your rap career to a whole new level:

EARN EQUIPMENT AND CUSTOMIZE YOUR CHARACTER
Develop your own personal style, and earn equipment to give you gameplay boosts. It’s not just about the music, it’s about the style.

TAKE ON OTHER PLAYERS IN RAP BATTLES
You gotta beat the best to be the best. Take on other players in gritty rap battles, and prove your skills on the world stage.

EXPLORE ICONIC CITIES AND NEIGHBORHOODS FROM RAP HISTORY
Work your way through iconic cities and neighborhoods from the East to West coasts, playing concerts and learning about those that came before.

No time is better than the present to get started and make a name for yourself in the rap game. The phone is ringing and Snoop’s on the line? Are you gonna say yes, or no?

Brought to you by Snoop Dogg’s very own digital production company, DiGGital DoGG. An artist-owned company revolutionizing the digital space, and the way artists get involved. Snoop Dogg to the core: https://www.diggitaldogg.com/

How to Install Snoop Dogg's Rap Empire for Windows PC or MAC:

Snoop Dogg's Rap Empire is an Android Simulation app developed by diGGital doGG and published on the Google play store. It has gained around 862512 installs so far, with an average rating of 4.0 out of 5 in the play store.

Snoop Dogg's Rap Empire requires Android with an OS version of 5.0 and up. In addition, the app has a content rating of Everyone, from which you can decide if it is suitable to install for family, kids, or adult users. Snoop Dogg's Rap Empire is an Android app and cannot be installed on Windows PC or MAC directly.

Below you will find how to install and run Snoop Dogg's Rap Empire on PC:

If you follow the above steps correctly, you should have the Snoop Dogg's Rap Empire ready to run on your Windows PC or MAC. In addition, you can check the minimum system requirements of the emulator on the official website before installing it. This way, you can avoid any system-related technical issues.