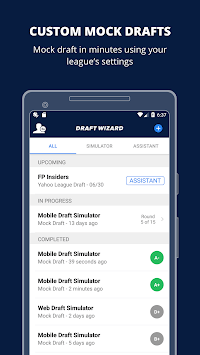 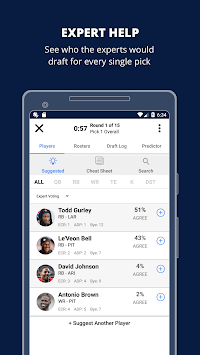 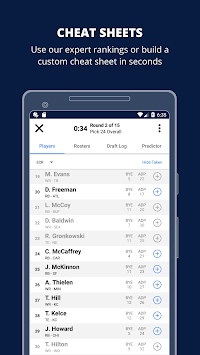 Prepare for 2018 fantasy football with mock drafts and early rankings.

Created by FantasyPros, the #1 fantasy sports advice and tools provider in the world, Draft Wizard’s features give you the ultimate edge in your fantasy football draft:

Cheat Sheet Creator
Customizable cheat sheets, based on our ECR (Expert Consensus Rankings) and ADP (Average Draft Position). Use our default cheat sheet, or build your own!

Draft Assistant w/ Sync - (MVP/HOF users only)
Syncs with your live draft in real-time, automatically tracks taken players for you, and gives you expert advice on who to pick in each round! Works with most major league hosts, including Yahoo, NFL, & CBS!

Draft Assistant (Manual) - (PRO/MVP/HOF users only)
Enter draft pick selections during your real fantasy draft, to instantly get expert help on who to pick for your team.

Expert Advice
See who the experts would draft at every pick, to help you make the best possible decision.

Draft Analyzer
Get a draft grade and detailed analysis, to identify your strengths and weaknesses.

Notes
1. Both the Manual and Live Draft Assistant features support the following league hosts: Yahoo, CBS, NFL .com, MyFantasyLeague, RT Sports, Fantrax, and NFFC.
2. ESPN leagues can be imported into the app, but only the Manual Draft Assistant is supported. Draft Assistant w/ Sync is not supported for ESPN fantasy football leagues.
3. Auction drafts are not supported by the app.
4. Our app will not make the draft picks for you. Selections must be made in your league host's draft room interface.

Draft History
Review past draft grades to fine-tune your draft strategy. Save an unfinished mock draft to pick up where you left off later.

Auto-Pick
In the draft simulator, our algorithms make the picks for you, so you can sit back, relax, and analyze the draft results.

Pick Predictor (PRO/MVP/HOF users only)
Don’t draft your sleepers too soon! Pick predictor analyzes your draft in real time, to show you the odds of each player being taken before your next pick.

Custom Draft Configuration
Configure your own league settings, and select the number of teams, players, and positions.

PPR and Half PPR Scoring
Nail your PPR or Half PPR draft with our customized rankings and advice, or use our web version for custom scoring.

Stats and Projections
See player stats and projections for the 2017 NFL season while you draft (works with Standard, PPR, & Half PPR leagues)!

Fantasy News & Expert Player Notes/b>
See the latest fantasy news for every NFL player, and find out who the expert’s sleepers & busts are for 2017!

Keeper League Support (MVP/HOF users only)
Track your league's keepers for each team, so you can mock draft with settings that match the real thing.

Accurate ADP
Our ADP factors in each player’s average draft position at sites like Yahoo, CBS, NFL.com, ESPN, and more, so you'll know where players will be drafted.

Up-to-Date Rankings
Unlike many draft kits, our expert rankings are updated every day, so you’ll never have to worry about outdated player rankings or advice.

FantasyPros is a leader in the fantasy sports space and has won several awards at the FSTA (Fantasy Sports Trade Association), including 'Best Service/Tool' in 2014, 2015, & 2016!

Make sure your fantasy team dominates the 2018 NFL season. With mock drafts, cheat sheets, rankings, and more, Draft Wizard gives you the ultimate edge for your fantasy draft. Download today and get ready to win your fantasy football league!

How to Install Fantasy Football Draft Wizard for Windows PC or MAC:

Fantasy Football Draft Wizard is an Android Sports app developed by FantasyPros and published on the Google play store. It has gained around 100000 installs so far, with an average rating of 4.0 out of 5 in the play store.

Below you will find how to install and run Fantasy Football Draft Wizard on PC:

If you follow the above steps correctly, you should have the Fantasy Football Draft Wizard ready to run on your Windows PC or MAC. In addition, you can check the minimum system requirements of the emulator on the official website before installing it. This way, you can avoid any system-related technical issues.