- fixed skill animation not showing up in 2-player mode.

- added all new Multiplayer Mode to play upto 8 players together. 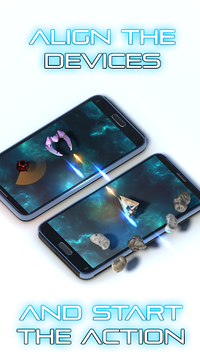 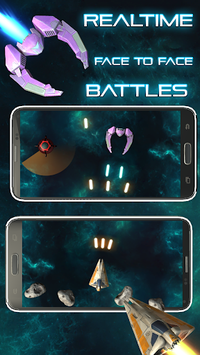 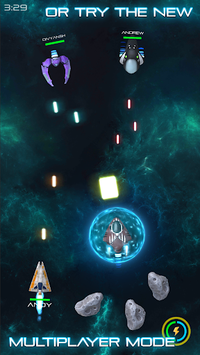 Thinking of playing something that doesn't need heavy resources, but still gives you a great gameplay? Then here's a suggestion - Dual Space Battle, a game that can pump your adrenaline in seconds. Dual Space Battle is a free action game that's playable with friends and without internet connection, just like Mini Militia if you remember.

This game has been appreciated by the gaming community for being simple, and yet impactful. As a player, you'd be defending your space ship from being attacked by adversaries. Though the story is made simple, the game is not. You need quick moves and defending tactics to rule over the enemies.

One attribute making this game special is the ability to play along with your friends, but all should be nearby. You'll be made into a team and fight against the other team until either of the teams vanish completely. Taking about graphics, we still wonder how its developers such smooth graphics in a game under 30MB size. Well, you'll see what it's like. Here's how you can play with the game. Download the game and install it. If you're planning to play against your friend either of you have to initiate as host by turning on the hotspot. This would let other player to join the network by connecting via Wi-Fi.

For example; if you're taking the charge, you should turn on hotspot in your mobile and share the name/password to your friend to join. Thus, your friend (also the enemy in game) should join your hotspot network and be connected.

Note: Dual Space Battle also supports connecting over Bluetooth, which is of the same process as in Wi-Fi mode.

Now, since you being the incharge, should press "Host" on your screen to create a room which will be joined by your friend (two-player mode) or friends (multiplayer mode). That being said, now both of you have to pick a spaceship of choice, and get ready for the fight. You can set its capability according to the fight, like "asteroid calling" , "space mine" , "bullet spray" etc. Picking a specific fighting skill that you can paly good at, can give you advantage over others. So better trail all before with a match against system to know which one suits you.

That's it! You're good to go now. Make sure you jump in with tactics to defend/attack your enemies. And if playing by multiplayer mode, gain synergy with your friends. The game developers, D4US are constantly developing it with new features and bug fixes, thus making sure you have the best experience possible.

How to Install Dual Space Battle for Windows PC or MAC:

Dual Space Battle is an Android Action Game that is developed by D4US and published on Google play store on Aug 12, 2016. It has already got around 100,000+ downloads so far with an average rating of 4.0 out of 5 in play store.

Dual Space Battle requires Android OS version of 3.4 and up. Also, it has a content rating of Everyone , from which one can decide if it is suitable to install for family, kids or adult users.

If you follow the above steps correctly, you should have the Dual Space Battle Game ready to run on your Windows PC or MAC.